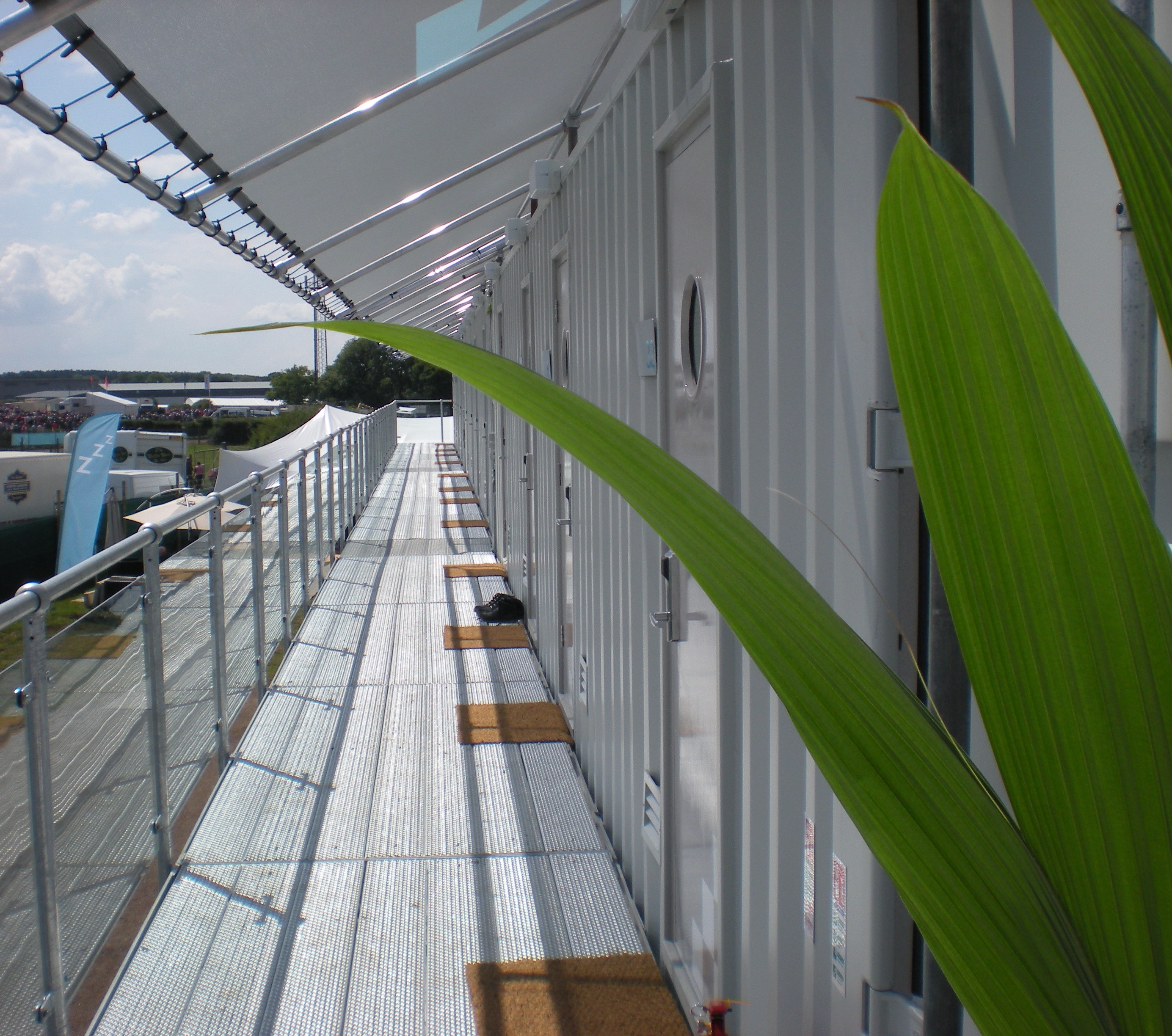 Since its inception last year, Snoozebox has seen phenomenal growth providing accommodation for events ranging from the Queen’s Jubilee equine extravaganza to Silverstone as well as the Edinburgh Festival and Stoneleigh Park.

The innovative concept all began in a tent in Le Mans, France in the small hours of a summer morning in 2010. Snoozebox founder and chief executive Robert Breare was fed up with the discomfort of camping that he had to endure to attend events such as the Le Mans 24 hours motor race.

“I began thinking, there must be a better way to do things than this,” says Mr Breare.

Working with architect Jonathan Manser, managing director of the London-based Manser Practice, Mr Breare created the events accommodation solution that is Snoozebox. It is a modular hotel solution like no other, made from steel shipping containers. Each 45 foot by 9 foot container typically contains four ensuite rooms equipped with luxuries such as flat-screen TVs and air-conditioning.

Having worked up detailed designs with The Manser Practice, Snoozebox hired Elements Europe, part of the Pickstock Group, early in 2011 to deliver the solution. Elements Europe won the 5 year global manufacturing agreement shortly after.

Elements Europe is responsible for the purchase of the steel shipping containers – which Mr Breare stresses are always new – and their entire fit-out, with the work done at their Telford factory. Having had holes for each room’s doors punched out of the containers prior to delivery to Elements Europes’ facility, the firm then sets about installing partitions, insulation, furniture and all the necessary plumbing and electrical services. The Telford factory can produce around 50 hotel rooms – between 12 and 13 containers – per week and a further 40 room pods and 100 bathroom pods per week from their Oswestry factory.  Prior to their delivery to Snoozebox, collapsible external canopies and walkways are added to the containers by a steel subcontractor.

Mr Breare is keen to point out that there was a “huge amount of work done on sound and temperature” at the development stage ensure customers’ comfort.

“You can yell at the top of your voice in one room and not be heard in the room next door,” he says.

“The sound proofing is better than many permanent hotels. Having air-conditioning and control of the temperature in the rooms was also critically important – this had to be a solution that would work anywhere in the world.”

Shortly after appointing Elements Europe in early 2011, Snoozebox received its first order, from the Silverstone racing circuit. The order was for a 40-room onsite hotel at that summer’s Formula 1 British Grand Prix.

Mr Breare says the level of activity involved to turn his dream into a reality in time for the British Grand Prix was “frenetic”, and credits Elements Europes’ commitment in making it not just possible but a success.

Such a success that Silverstone upped its order to 200 rooms for this year’s Grand Prix, and to 320 for next year. Snoozebox was also hired to provide accommodation at the recent Queen’s Diamond Jubilee celebrations, and will be making an appearance at this year’s Download and Hop Farm music festivals.

The key to Snoozebox’s apparently instant appeal, says Mr Breare, is that the hotel can be “dropped anywhere”, requiring no services or foundation work. In addition to the room containers being delivered onsite – which because they are standard shipping containers can easily be transported by sea, rail or road – there is another container delivered that Mr Breare refers to as the mothership.

This is a 40 foot-long shipping container that includes a water and wastewater storage system, a hot water and a vacuum system for drawing away the wastewater from the rooms. To complete the onsite self-sufficiency, mobile generators supply electricity. Apart from the mothership, there is one more container delivered to site that is not used for accommodation, and that comprises a supplies store room and a site office / hotel reception.

For Mr Breare, the next stage is broadening its application beyond hotels at major events.

“Customers are building up quickly for a more utilitarian version to use for staff accommodation,” he says.