Every Home and Business Will Have Access to State-of-the-Art All-Fiber Internet Network’s 10 Gbps Speeds – The Fastest Available in the U.S.

(Mesa, AZ—July 12, 2022) As Metro Phoenix continues its rapid growth, the region’s internet networks have struggled to keep pace. That’s why Mesa City leaders issued an RFI for an all-fiber Open Access Network, and announced earlier this month that SiFi Networks would be building the Mesa FiberCity® Open Access network. The $400 million project is privately funded and will provide access to all of Mesa’s 170,000 homes, businesses, and institutions with speeds up to 10Gbps/10Gbps, the fastest residential speeds available in the United States. SiFi Networks also announced today pricing for super-fast 1 Gigabit symmetrical service, which is about 10 times faster than what’s commonly offered today, will be available at prices from $59.95 per month.

“The Mesa FiberCity® Open Access network will be an infrastructure project like no other. It’s a revolutionary network that allows multiple internet service providers and wireless carriers to compete for business using the same fiber cables, minimizing construction disruption and providing consumers with true choice,” said Ben Bawtree-Jobson, CEO, SiFi Networks. “What this means is everyone will have access to fast, affordable, and reliable high-speed broadband, and the city will have the Open Access fiber infrastructure needed to power Smart City services,” he added.

Notably, the Mesa FiberCity® project will be an Open Access network, a successful model taking hold in the United States and across Europe. With Open Access, fiber infrastructure is shared by multiple internet service providers (and other service providers like wireless carriers, telehealth providers, and Smart City service providers), enabling competitive service and pricing in the marketplace, improving the user experience, and protecting net neutrality. Like all SiFi Networks fiber builds in the U.S., the Mesa FiberCity® project is privately funded with no cost or risk to taxpayers.

Through SiFi’s FiberCity® Aid program, about 33,000 of the city’s 220,000 households will be eligible for reduced-cost internet, according to Bawtree-Jobson. SiFi Networks will also partner with the City of Mesa to provide Smart City services to drive municipal efficiencies and enhance the city’s quality-of-life.

“Typically, a city can reduce its costs of delivering services by upwards of 10% by deploying Smart City services like Smart trash bins that eliminate truck rolls, Smart street lighting, and more. By running fiber to every signalized intersection, we can power traffic sensors, public safety cameras, and even 5G wireless service. All of these use a tremendous amount of bandwidth, which requires fiber to handle the enormous backhaul of data. We’re building it with the Mesa FiberCity®,” he noted.

The multi-year construction project will use microtrenching technology which buries fiber cables a foot deep inside narrow incisions cut into pavement at the side of the roadway—typically where the pavement meets the curb. The method is quiet, efficient, and fast. The roadway is then immediately restored.

And while there was a great deal of excitement surrounding the announcement, Bawtree-Jobson cautioned the community to beware of aggressive and confusing pricing offers from service providers doing business in the marketplace. “I would like to urge residents to be cautious and not fall victim to being enticed into long-term contracts with existing providers while the Mesa FiberCity® network is being constructed,” he said. “Although such offers may appear tempting, they will not provide a comparative cost or speed that Mesa FiberCity® will offer once complete. In every instance, fiber wins on speed, reliability, and affordability. The public is encouraged to join the wait list at www.mesafibercity.com. 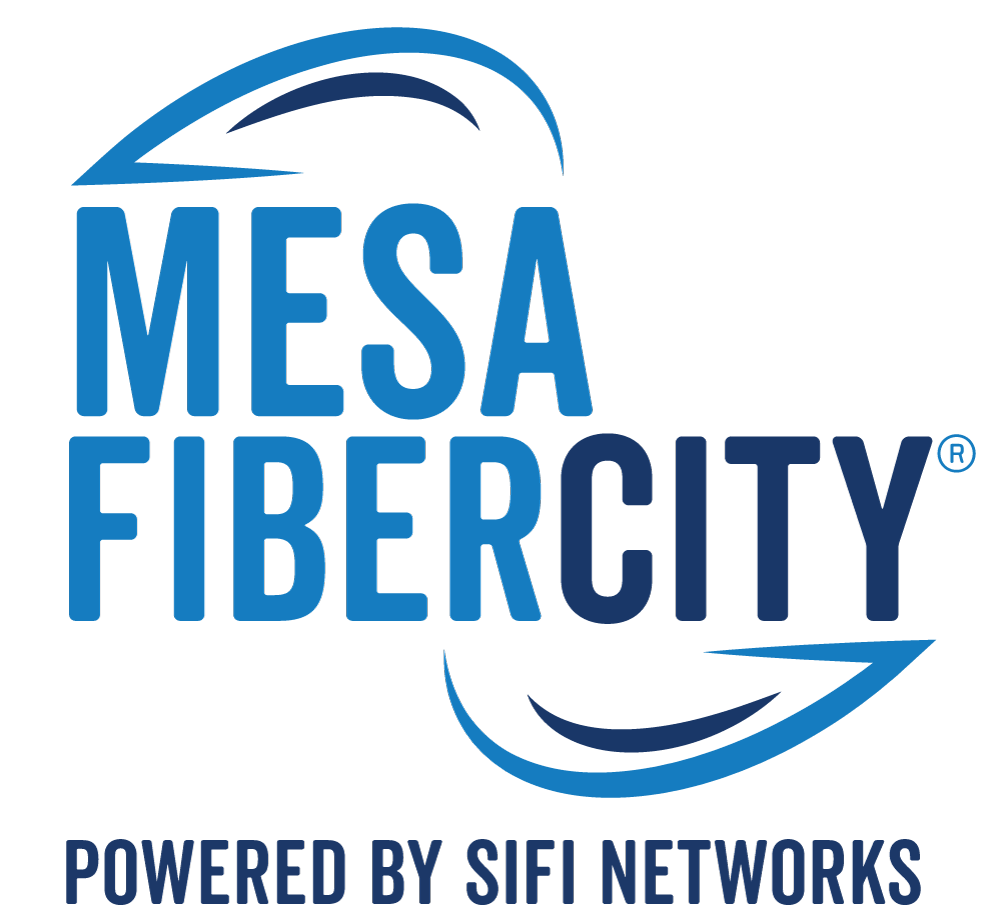