Jefferson Sheard Architects has published its annual 16/17 report which reflects on the past 12 months progression in sectors such as student accommodation and the public sector, as well as highlighting key projects of significance.

A key project featured in the report is The Pickstock Group’s Colchester student accommodation scheme and it is also the highest value project of those listed.

Pickstock Construction acted as principal contractor whilst Elements Europe designed, manufactured, delivered and installed 1049 Room Modules as well as all roof cassettes and stair cores for the scheme offering a complete off-site solution to the two-phased development.

The Pickstock Group work on a number of projects with Jefferson Sheard, specifically student accommodation which they note in the report has almost doubled from last year. 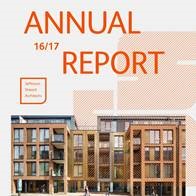