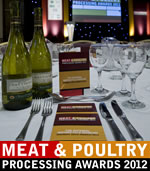 Pickstock Ashby has been shortlisted as a finalist in the prestigious Meat and Poultry Processing Awards.

Meat and poultry processors nationwide have been battling it out to claim prizes in the esteemed Meat Trade Journal awards; Pickstock Ashby has been named as a finalist in the Export Initiative of the Year category.

Gill Draper, Office Manager at Pickstock Ashby, says “we are proud to have got so far in such a well regarded contest; the competition was tough so to have been shortlisted to the final three is a great achievement”

The award ceremony is being held on Monday the 26th March in Birmingham.